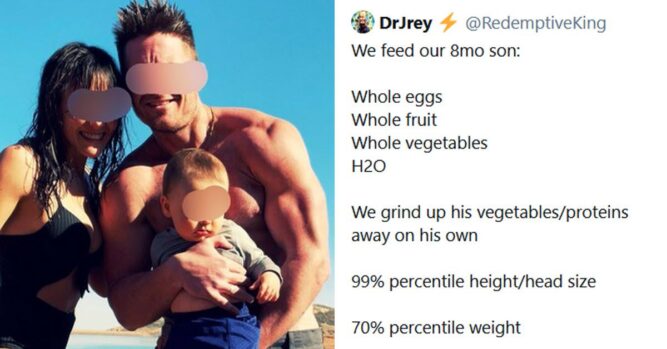 Although there are many things that people like to discuss, diet and exercise seem to be at the top of the list. In fact, if you stick around any conversation long enough, they are eventually going to start talking about food and perhaps even the subject of weight loss may come into it. Of course, everybody has their own idea when it comes to the right way to eat and a reasonable person realizes that it is up to the individual. As long as they don’t try to force their own ideas on you beyond what is being asked for, it can be a very interesting conversation. Then again, some people tend to take it to extremes.

In the following Twitter post, a father who is absolutely obsessed over fitness may have taken things too far and people on Twitter were quick to let him know about it. He had a baby, and he and his wife wanted to make sure that the baby had a high percentile weight with low body fat and everything was perfect, along with the baby being very handsome. He shared the diet that he gave to his little son on Twitter and it wasn’t long before he was being roasted over an open twitter fire.

No, donuts aren’t based

But I work out, every day, harder than most people can imagine

For real — I mean that

So, sometimes I refuel with 🍩 pic.twitter.com/NkBBtkSuCE

The fitness fanatic in the log post is Jry, and he spoke about the restrictive diet on Twitter for the entire world to see. Admittedly, he has done fairly well for himself and you can tell from his pictures that he is a fit and healthy individual. Then again, when he tries to take things too far for his child, it went viral for the wrong reasons.

We feed our 8mo son:

We grind up his vegetables/proteins most the time, until he can chomp away on his own

Jrey shared a list of the things that he fed to his child and says it is why his son is lean. They don’t feed him any processed food blut Twitter didn’t want to hear that the baby was unusually handsome or mean, they said that babies need some body fat.

And a few beers

Woke up today feeling shame energy, because whenever I do this, I know I was not truly listening to my body

So I take the NRG out in the gym

heightened calories + back and biceps = an insane pump pic.twitter.com/o7x61vxUOz

Babies have about 15% body fat and it is there to help them to be healthy. They are not supposed to be a lean, mean, fighting machine.

It wasn’t long before Twitter had a lot to say about it and they were both opinionated and a little hilarious. Have a look at them for yourself below:

imagining this guy looking at regular babies and insulting their lack of gains https://t.co/77zWuMylYk

My kid ate a powered donut this morning and could kick your kids ass https://t.co/RIefmPMZp3

Feeding a baby eggs and whole fruits and veggies (he doesn't puree them, though, he "grinds them up" like a real man). What a novel concept.