Unfortunately, most of us have had to face some form of bullying at some point in our lives. Even as an adult, I’ve experienced bullying, although I was better equipped to handle it than I was when I was a child. The fact is, people can be cruel and that extends to people of all ages. However, it’s particularly heartbreaking to see a child suffering bullying. Any bullying I’ve personally experienced was nothing to me compared to how I felt when I found out my own child was the victim of bullying. It just makes us feel so helpless as parents. The worst thing is, there’s so little we can do. Schools try to protect children from bullying, but what about other places?

Children can get bullied everywhere they go. Whether it’s during play, shopping, or even, as illustrated in the story below, on public transportation. The thing is, a child can bully another child with nothing more than a look. That sounds crazy, but it’s true. Also, when I was a child, at least there was some respite from bullying at home, but now, social media has given bullies even more opportunities to bully people who are weaker than they are. Of every kind of bullying there is, there is perhaps nothing more horrible than someone older bullying someone much younger and weaker.

Lauren Russell was traveling on a bus with her little boy, Noah Gilbert, who is three years old, when she suddenly heard older children making some unkind remarks about her little boy. So what does a young teenager find that is so disturbing about a toddler than they would bully him? The color of his hair. Noah is a natural redhead and gets bullied incessantly because of it. The teenager even said that social services should take Noah away because he has red hair. Then, the teenager said something unthinkable: he said that if he ever had a ginger child, he would kill it.

Lauren shared the story on social media, where it quickly went viral. The support she has received from people around the world have made her feel better, but the fact is, there’s nothing that will take this horrible feeling away from a parent who has seen their child be bullied. And unfortunately, this isn’t something that can easily be explained to Noah. He’s too young to understand that sometimes people are just stupid. 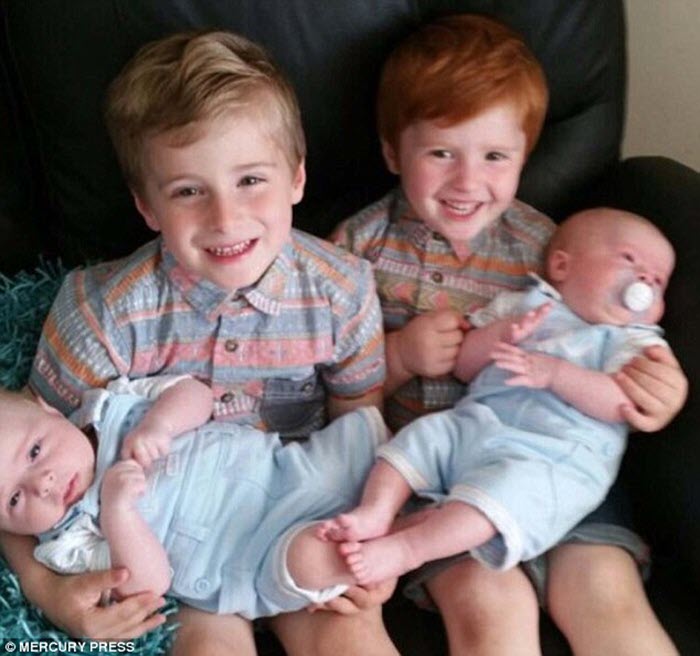 Read her post below. And please, educate the children you love on the potential for harm that can be done with meaningless but hurtful remarks. 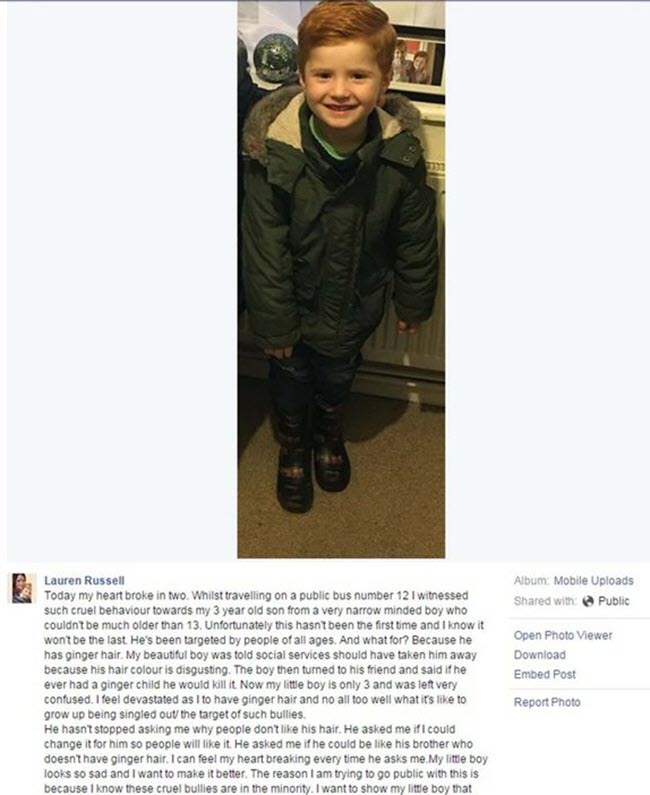 Today my heart broke in two. Whilst travelling on a public bus number 12 I witnessed such cruel behaviour towards my 3-year-old son from a very narrow-minded boy who couldn’t be much older than 13. Unfortunately, this hasn’t been the first time and I know it won’t be the last. He’s been targeted by people of all ages.

‘And what for? Because he has ginger hair. My beautiful boy was told social services should have taken him away because his hair colour is disgusting. The boy then turned to his friend and said if he ever had a ginger child he would kill it. Now my little boy is only 3 and was left very confused. I feel devastated as I to have ginger hair and no all too well what it’s like to grow up being singled out/ the target of such bullies.

‘He hasn’t stopped asking me why people don’t like his hair. He asked me if I could change it for him so people will like it. He asked me if he could be like his brother who doesn’t have ginger hair. I can feel my heart breaking every time he asks me. My little boy looks so sad and I want to make it better.

‘The reason I am trying to go public with this is because I know these cruel bullies are in the minority. I want to show my little boy that there is more good in this world than bad. There are kind and caring non-judgmental people who won’t ever single him out.

All images via social media