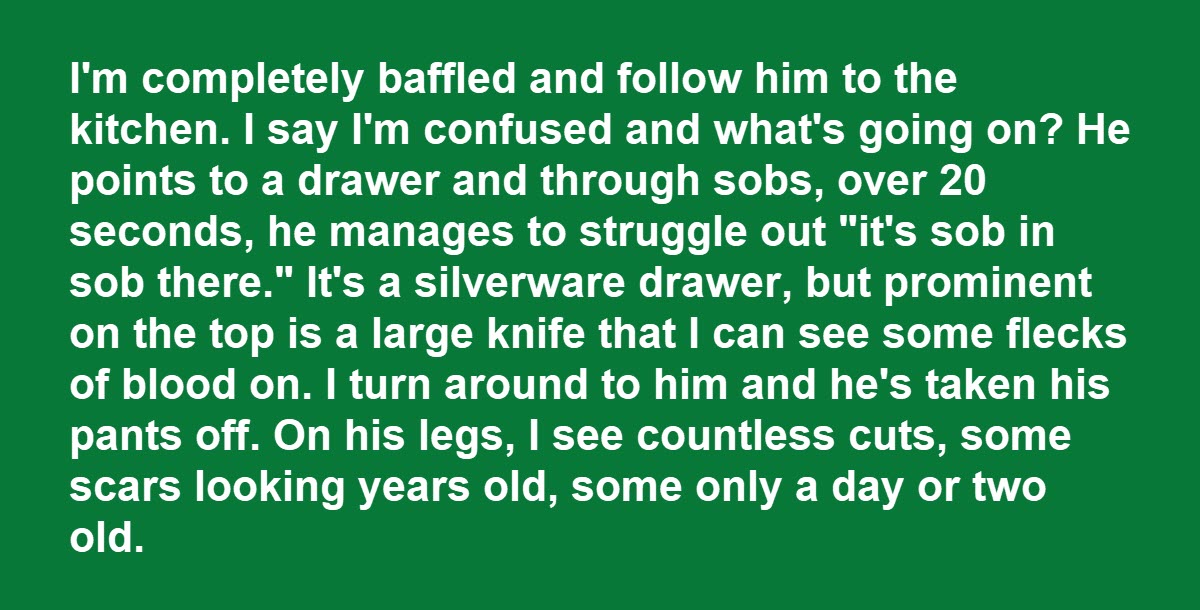 My first job was as a babysitter, and the kid I babysat and I had lots of fun. His parents were great, and they made sure we had plenty of great snacks and all of the toys and games we needed. We also lived near the library, so we walked to the library most days. Those were some great summers, and this young boy grew up to be a successful family man. I’m very proud of him. However, not all children as that fortunate, and I can’t imagine what I would have done had I encountered an abusive situation. I think I would have been shocked and would have probably talked to my parents about it. Had I seen what the young woman below saw, I hope I would have been as quick-witted as she was. We’re not sure if this is a true story, but it’s a good reminder to always be alert to what’s going on in the lives of children. We hope this child, if he’s real, gets the help he needs.

I babysat for a single mom down the road. She was going out with her new boyfriend. Cute great 5-year-old boy, though very timid. I myself was 15 at the time.

The night’s going fine, we decide to do some arts and crafts. He gets up and runs over to grab some scissors and runs back. I say “hold up slow down, you shouldn’t run with those it’s bad and dangerous.” He instantly drops the scissors and starts sobbing, turns around, and defeatedly heads towards the kitchen.

I’m completely baffled and follow him to the kitchen. I say I’m confused and what’s going on? He points to a drawer and through sobs, over 20 seconds, he manages to struggle out “it’s sob in sob there.” It’s a silverware drawer, but prominent on the top is a large knife that I can see some flecks of blood on. I turn around to him and he’s taken his pants off. On his legs, I see countless cuts, some scars looking years old, some only a day or two old.

So I’m a weird mix of confusion, fear, pity, and sadness. He had been cut on as punishment for any little thing he ever did wrong. I close the drawer and kneel down and tell him I’m so sorry I would never hurt him and to put his pants back on. It takes maybe twenty minutes for me to console him to stop crying and calm down and believe that I’m not going to cut him and this isn’t a test.

I get some treats for us, let him choose a TV show, and sit him down on the couch. I say I need to make a quick call, but I’ll be right around the corner and back asap. He agrees, and I call the cops. Non-emergency though so it’ll be a while. I let them know he’s still very shaky and I’d like to hang up and go be with him. I hang up, but before I do I decide to deadbolt all the doors just in case.

Lucky for me too, because mom gets home before the cops. I give the kid my Discman and headphones and send him upstairs so he can’t hear any of the ensuing unpleasantness. I go to the door and tell her she’s not getting in until the cops arrive. She freaks out, screams at me, and pounding in the door yelling to be let in, ordering the kid to let her in or “it’ll happen.” She goes around to all the doors and tries them.

Just as she grabs a brick and approaches a window, the cops pull in. She drops the brick and goes to them in hysterics, claiming I threatened to hurt her boy and I’m doing terrible things. I open the door and approach. Cops yell at me to stay where I am, one of them runs up to me and grabs hold. I do not resist and explain the situation. Halfway through mommy screams at me “LIAR! You did you, you monster you hurt my boy!!!!” Another cop manages to get her to stop screaming at me, and I convince my cop to step further away so I can finish.

Cops converse and tell me I’m going to be cuffed and put in the cruiser until medical services get there to inspect the child. I successfully argue that mom and son should not be alone together. Mom is belligerent “you have the culprit all cuffed you can go now throw the book at that monster why are you still here” the entire wait. Medical gets there, inspects the boy, I’m released with apologies and the mom takes my place in the cruiser.

Childhood should be carefree, playing in the sun; not living a nightmare in the darkness of the soul. To be concerned is to be human. To act is to care. Pass this message if you agree.