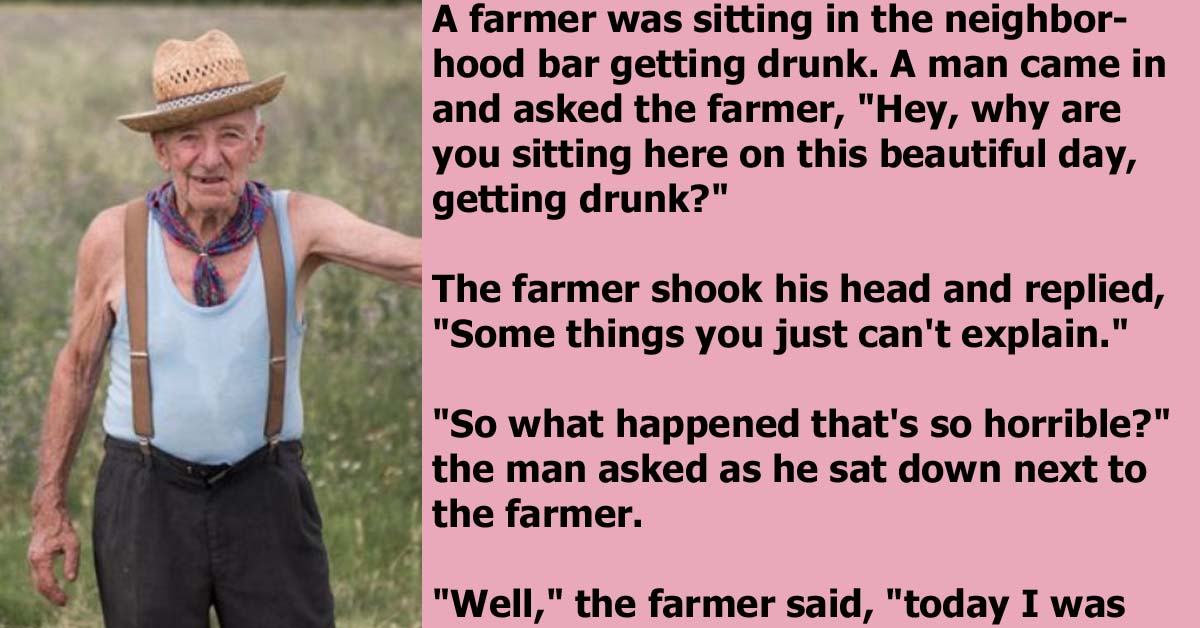 When we think about farmers, we often think about a wise old individual who is out plowing a field or perhaps taking care of the livestock. Farming has certainly changed in recent years, but there are still some old family farms that are operated in this way. The values of growing up on such a farm are unmistakable but there are going to be times when things don’t turn out exactly as we would’ve expected. It seems as if that is what happened in the following joke, when a farmer was at a bar drinking on the most beautiful day. He tried to explain what happened, but there are things you can’t explain.

A farmer was sitting in the neighborhood bar getting drunk. A man came in and asked the farmer, “Hey, why are you sitting here on this beautiful day, getting drunk?”

The farmer shook his head and replied, “Some things you just can’t explain.”

“So what happened that’s so horrible?” the man asked as he sat down next to the farmer.

“Well,” the farmer said, “today I was sitting by my cow, milking her. Just as I got the bucket full, she lifted her left leg and kicked over the bucket.”

“Some things you just can’t explain,” the farmer replied.

“So what happened then?” the man asked.

The farmer said, “I took her left leg and tied it to the post on the left.”

“Well, I sat back down and continued to milk her. Just as I got the bucket full, she took her right leg and kicked over the bucket.”

The man laughed and said, “Again?”

The farmer replied, “Some things you just can’t explain.”

“I took her right leg this time and tied it to the post on the right.”

“Well, I sat back down and began milking her again. Just as I got the bucket full, the stupid cow knocked over the bucket with her tail.”

“Hmmm,” the man said and nodded his head.

“Some things you just can’t explain,” the farmer said.

“Well,” the farmer said, “I didn’t have anymore rope, so I took off my belt and tied her tail to the rafter. In that moment, my pants fell down and my wife walked in … Some things you just can’t explain.”