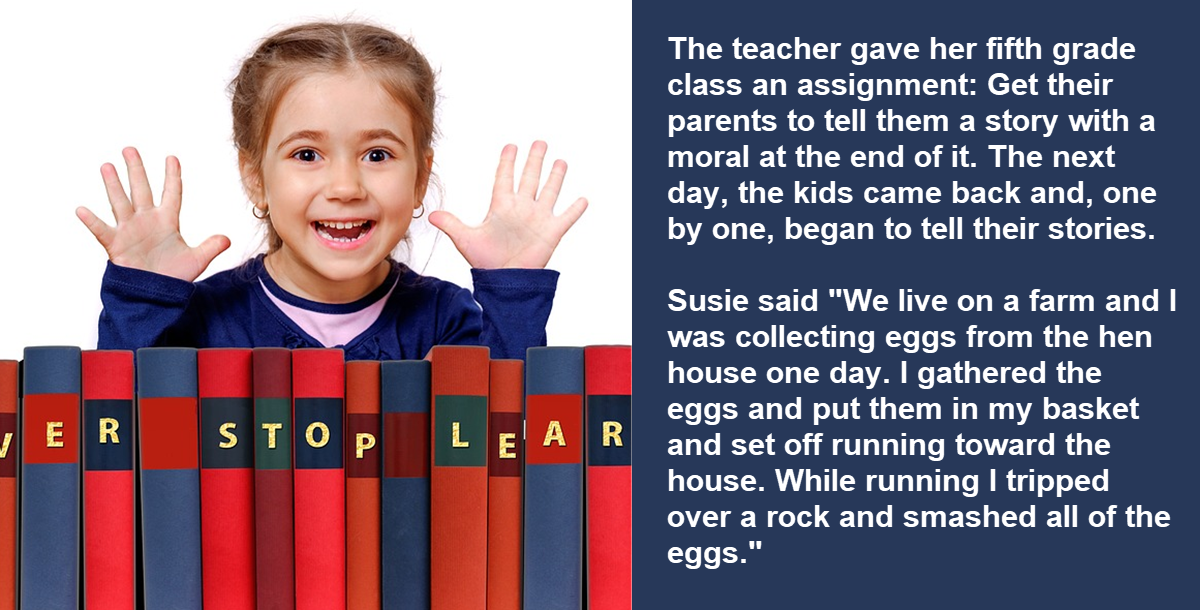 It amazes me that parents of every generation forget the golden rule of raising kids: whatever they hear you say, they’re going to repeat to almost everyone they know. They’ll repeat it to their friends, their friends’parents, their preachers, and their teachers. My mom loves to tell a story of when I was a kid. Her husband was a party dude who loved to be around his buddies and enjoy a beer or five. She always joked with him and called him a “wino and a woman chaser.” Well, one day at school when I was in the second or third grade, we had an activity in which the teacher told us to go around the circle and share what our dads did for a living. What do you think I said? Well, of course, I said that my stepdad was a “wino and a woman chaser.” Kids tell everything. Enjoy the story below.

The teacher gave her fifth grade class an assignment: Get their parents to tell them a story with a moral at the end of it. The next day, the kids came back and, one by one, began to tell their stories.

Susie said “We live on a farm and I was collecting eggs from the hen house one day. I gathered the eggs and put them in my basket and set off running toward the house. While running I tripped over a rock and smashed all of the eggs.”

“So what’s the moral of the story Susie?” Asked the teacher.

“Don’t put all of your eggs in one basket,” said Susie.

Next it was Billy’s turn to go.

“We also live on a farm,” said Billy. “We have incubators to help our eggs hatch. One night there was a thunderstorm and lightning knocked out the power to the incubators.”

“So what’s the moral of that story Billy?” Asked the teacher.

“Don’t count your chickens before they hatch,” said Billy.

The teacher turned to Janie. “Janie, do you have a story to share?’

“Yes ma’am. My daddy told me a story about my Mommy. She was a Marine pilot in Desert Storm, and her plane got hit. She had to bail out over enemy territory, and all she had was a flask of whiskey, a pistol, and a survival knife.

She drank the whiskey on the way down so the bottle wouldn’t break, and then her parachute landed her right in the middle of 20 Iraqi troops. She shot 15 of them with the pistol, until she ran out of bullets, killed four more with the knife, till the blade broke, and then she killed the last Iraqi with her bare hands.

“Good Heavens,’ said the horrified teacher. ‘What did your Daddy tell you was the moral to this horrible story?”

“He said don’t mess with Mommy when she’s been drinking.”