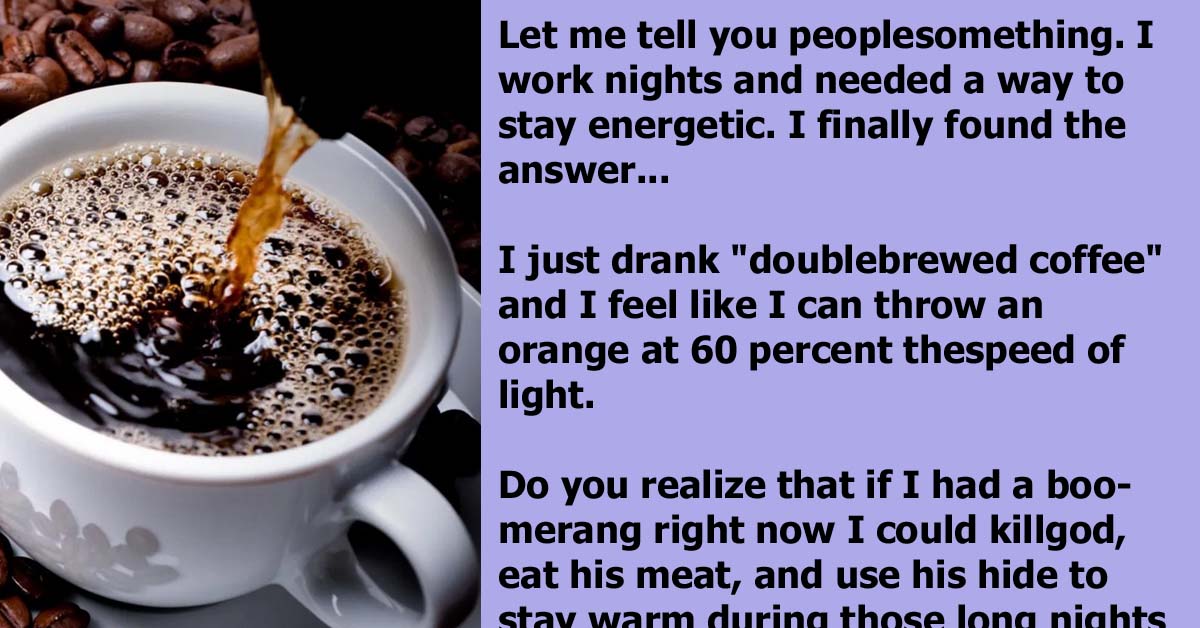 Coffee is a part of our lives and there is no denying the fact that it is one of the most popular beverages on the planet. Most of us tend to have our favorite brew of coffee, regardless of whether it is plain back coffee, with cream and sugar or perhaps even something a little bit fancier from the local Starbucks. If you are a lover of coffee and would like to get more out of every cup, then there is an option that you may never have considered before. It’s explained below in rather colorful language that motivates you to want to try it for yourself.

Pour first batch of coffee back into the coffee maker.

Let me tell you people something. I work nights and needed a way to stay energetic. I finally found the answer…

I just drank “double brewed coffee” and I feel like I can throw an orange at 60 percent the speed of light. Do you realize that if I had a boomerang right now I could kill something, eat his meat, and use his hide to stay warm during those long nights on the savanna? ENERGY. After drinking this special coffee I suddenly find myself triangulating coordinates and shit in my mind. I’m pretty sure if I was a floating head that I’d be able to float directly to the Bermuda triangle without stopping for directions. I have so much energy that I’m now watching half-hour-long sitcoms in just seconds!

You ever notice that they don’t have any type of Karate for German shepherds? If dogs learned to focus their chi, just imagine how screwed we’d be? Well, I wouldn’t be screwed, but you most certainly would be. Right now I could probably fight off a giant ghost flamingo made entirely from ninja stars and tasers. In fact, I’m about 85percent certain that I could mess up a 2003 Nissan Altima, if it were to suddenly become self-aware and hostile towards me. ENERGY.

I have so much energy that I can multitask more stuff right now than your lazy ass will accomplish within the next 4 months. While I type this I’m also filming a remake of “tango and cash”, done with puppets. Simultaneously, I’m also updating mymatch.com profile while dry humping a zebra and skiing.

And guess what? I just squeezed a New York steak with my bare hands and crushed it into individual calories! I am the ghost of Jim Varney and I will haunt you into infinity! I am the one that inspired the “blade” movies and I will triumph! I am the singularity, the way, the light, the man who can turn a normal visit to the zoo into a multiple felony getaway vacation to the andromeda galaxy and I don’t take crap from anyone!!

If you want to lay around until you morph into a giant stick of butter and explode, that’s your choice.But if you want so much energy that you could morph into a cybernetic plasma cheetah and beat the living sh*t out of the power rangers then I suggest you try “double brewed coffee”. ENERGY.