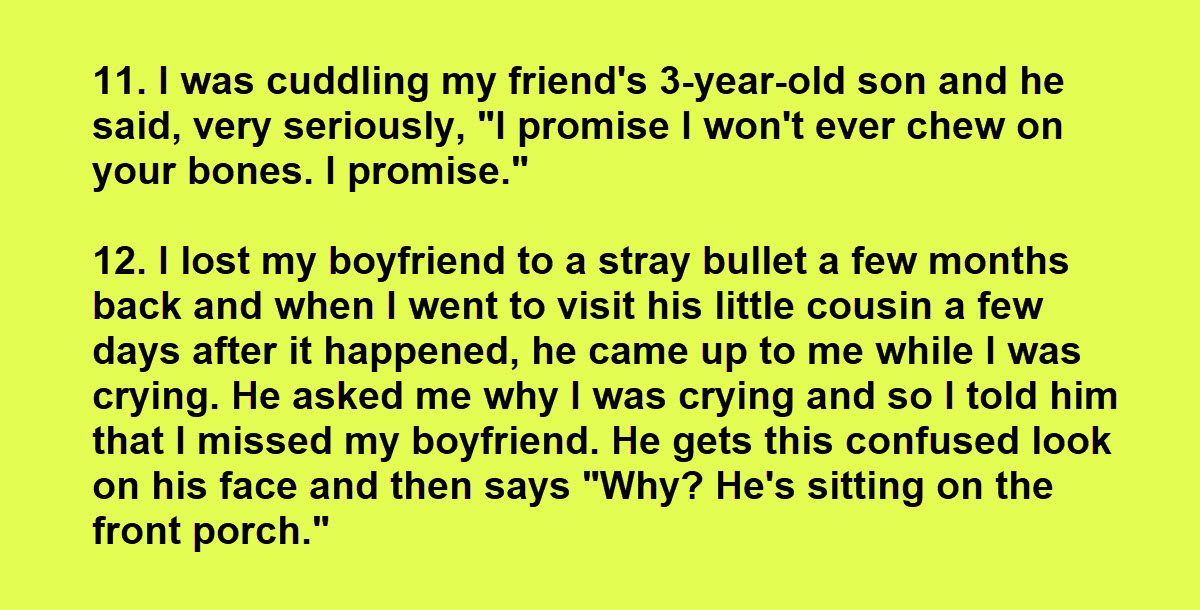 I got my first job when I was about 12 years old and it was as a babysitter for the little boy who lived across the street from me. I was young, but I was mature, and with my parents being right across the street, the little boy’s parents felt secure and knew their little one was in good hands. We lived in a small town in Arkansas, so it was a pretty safe situation. I loved that little boy. He was so smart and he and I had about five years together before I got older and got a better paying job. I don’t recall him ever saying anything creepy or scary to me, but if he had, I’d have been freaked out. I was an easily spooked kid myself. Some of the stories below make me feel a little freaked out even now. Enjoy these stories. We don’t know if they’re actually true, but that’s part of the fun, isn’t it? Just imagine…

1. A few years ago, I was putting my friend’s daughter to bed for the night. She was about 3 at the time, and she was fighting going to sleep. She asked me why she had to go to bed, and I said “Because it is late and it’s time for little girls to get a good night’s rest.” She then pointed at nothing across the room and said “What about that little girl?”

2. Two years ago, I was looking through my elementary school yearbook with my 5-year-old cousin, when we were at a page with a 2nd-grade class, she pointed to a boy’s photo and said: ” that looks just like Nicolas!”. When I asked who Nicolas was she just said “The boy in my closet” and kept on looking through the pictures. I almost died.

3. Little kids know stuff, man. My niece is 4 and talks about her ‘older sister’ constantly. She is always talking to her too. She is an only child and has no idea her mother had a previous pregnancy a few years back that was a midterm loss. Weirds me out something major.

4. I was heading to the bathroom on the second floor of my aunt’s house when I saw my cousin, April, on the stairs. April was four and very animated. She was busy making funny faces while sitting on the stairs. I asked her what she was doing. She said, “I’m copying the lady with the braid.” I looked around, there was no one else but us. I asked, “where is the lady, April?” She pointed to a beam running parallel to the stairwell. I asked April, “what is the lady doing?” She said, “makin’ funny faces.” I smiled and started walking up the stairs again when April said something that stopped me in my tracks. April, “her braids is around her neck.” I turned back and asked April to repeat herself. April pointed, “the lady is hanging by her braid… She’s making funny faces.” Then April started making a face which I then realize was it someone gasping for air.

5. I was looking after Jack (A five-year-old) who said a man named Jacob who dressed like a lumberjack was sitting next to me on the couch. He must have seen the shock in my face, and said: “Don’t worry, he doesn’t have any arms.”

6. My little nephew used to talk about a woman who would visit his room at night. He said she wore a red dress, that her name was Frannie and that she would sing to him….and that she floats.

7. I watched a few kids while their parents were at a movie. I put the youngest kid (4) to sleep and watched T.V. till the parents came home. The next day the parents called. According to the 4-year-old kid I stood in the doorway and stared at him for a very long time, smiling. I was so confused I didn’t know what to say.

8. My friend and I were babysitting her 4-year-old cousin one night and she really believed in all that reincarnation stuff and decided to test out her theories on her little cousin. She began asking him questions that he didn’t quite understand, but then stated it simply, “what were you before you were (kids name)?” He replied that he was a conductor and waved his hands in the motion that a conductor would. The problem with this was that this little boy was born blind.

9. A few years ago, I was babysitting a friend’s daughter. They lived in an apartment with a big patio window. She walked up to the glass door leading out to the patio and stared motionless into the night for several minutes. Shortly after, she runs into my arms saying “Scary. Too scary.” She wouldn’t let me put her down and demanded that I hold her and rock her for the next half hour. Eventually, she started repeating over and over: “The dark coming inside now. The dark coming inside now.”

10. After tucking him in he said: “You know, I never killed anybody. They didn’t have to take my arm. But the ground was all covered in blood.” My theory: reincarnated WWI soldier.

11. I was cuddling my friend’s 3-year-old son and he said, very seriously, “I promise I won’t ever chew on your bones. I promise.”

12. I lost my boyfriend to a stray bullet a few months back and when I went to visit his little cousin a few days after it happened, he came up to me while I was crying. He asked me why I was crying and so I told him that I missed my boyfriend. He gets this confused look on his face and then says “Why? He’s sitting on the front porch.”

13. I once babysat a girl called Sarah who used to love when I babysat. I know this because her mom used to tell me how she always requested me over the others. But Sarah took it a step further one evening and said “when you died I want to put you in a glass jar so I can keep you and see you forever.”

14. Looking after my little cousin in Montana one night, and he started telling me about the `Creeper Man’ who lives in his mom and dad’s bedroom. He brings it up after he visits them. I made the mistake once of asking what he looks like. He said, “Oh, he doesn’t have a face.”

15. One night I was babysitting my friend’s children. The youngest (about five years old) drew a picture of a woman hanging from the ceiling, looked up at me, and said “she told me to draw this. She’s coming for you. Hide.”