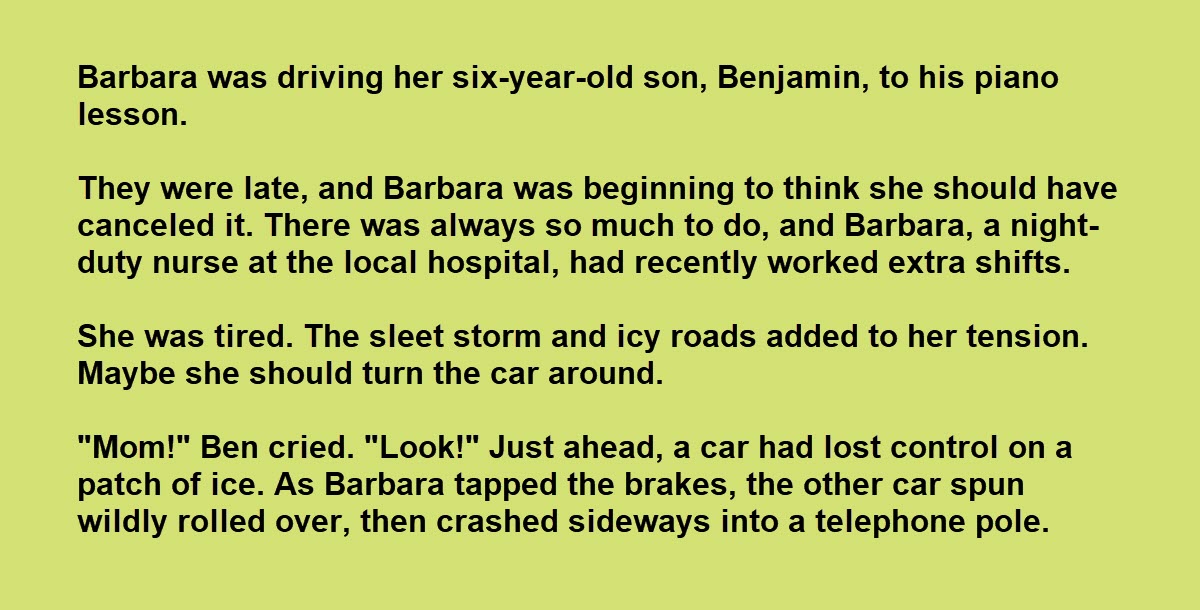 In all of the religions of the world, there’s an element of an afterlife concept. They all call it something different, but in most faiths, people are given hope of something better than what we have here on this earth. Or at least something. For grieving people who have lost someone to death, the thought of never seeing that person again is devastating and people go to great lengths to try to communicate with their loved ones in some way. Some people are taken in by shysters, while others seem to find some way that works for them. What we hope above all for our departed loved ones is that they’re in a better place, someplace that’s free of pain. When parents lose a child, that’s their dearest wish. We don’t know if the story below is true, but it’s a heartwarming story that everyone should read. Enjoy.

Barbara was driving her six-year-old son, Benjamin, to his piano lesson.

They were late, and Barbara was beginning to think she should have canceled it. There was always so much to do, and Barbara, a night-duty nurse at the local hospital, had recently worked extra shifts.

She was tired. The sleet storm and icy roads added to her tension. Maybe she should turn the car around.

“Mom!” Ben cried. “Look!” Just ahead, a car had lost control on a patch of ice. As Barbara tapped the brakes, the other car spun wildly rolled over, then crashed sideways into a telephone pole.

Barbara pulled over, skidded to a stop and threw open her door. Thank goodness she was a nurse – she might be able to help these unfortunate passengers.

Then she paused. What about Ben? She couldn’t take him with her. Little boys shouldn’t see scenes like the one she anticipated. But was it safe to leave him alone? What if their car were hit from behind?

For a brief moment, Barbara considered going on her way. Someone else was sure to come along. No! “Ben, honey, promise me you’ll stay in the car!”

“I will, Mommy,” he said as she ran, slipping and sliding toward the crash site. It was worse than she’d feared. Two girls of high school age are in the car. One, the blonde on the passenger side, was dead, killed on impact.

The driver, however, was still breathing. She was unconscious and pinned in the wreckage. Barbara quickly applied pressure to the wound in the teenager’s head while her practiced eye cataloged the other injuries. A broken leg, maybe two, along with probable internal bleeding. But if help came soon, the girl would live.

A trucker had pulled up and was calling for help on his cellular phone. Soon Barbara heard the ambulance sirens. A few moments later she surrendered her lonely post to rescue workers.

“Good job,” one said as he examined the driver’s wounds. “You probably saved her life, ma’am.” Perhaps.

But as Barbara walked back to her car a feeling of sadness overwhelmed her, especially for the family of the girl who had died. Their lives would never be the same. Oh God, why do such things have to happen?

Slowly Barbara opened her car door. What should she tell Benjamin? He was staring at the crash site, his blue eyes huge. “Mom,” he whispered, “did you see it?”

“The angel, Mom! He came down from the sky while you were running to the car. And he opened the door, and he took that girl out.”

“The passenger side. He took the girl’s hand, and they floated up to Heaven together”

“What about the driver?”

Ben shrugged. “I didn’t see anyone else.”

There was no way he could have known what happened to either of the passengers. Nor could the passenger door have been opened; Barbara had seen its tangle of immovable steel herself. Yet Ben’s account brought consolation to a grieving family. Their daughter was safe in Heaven. And they would see her again.