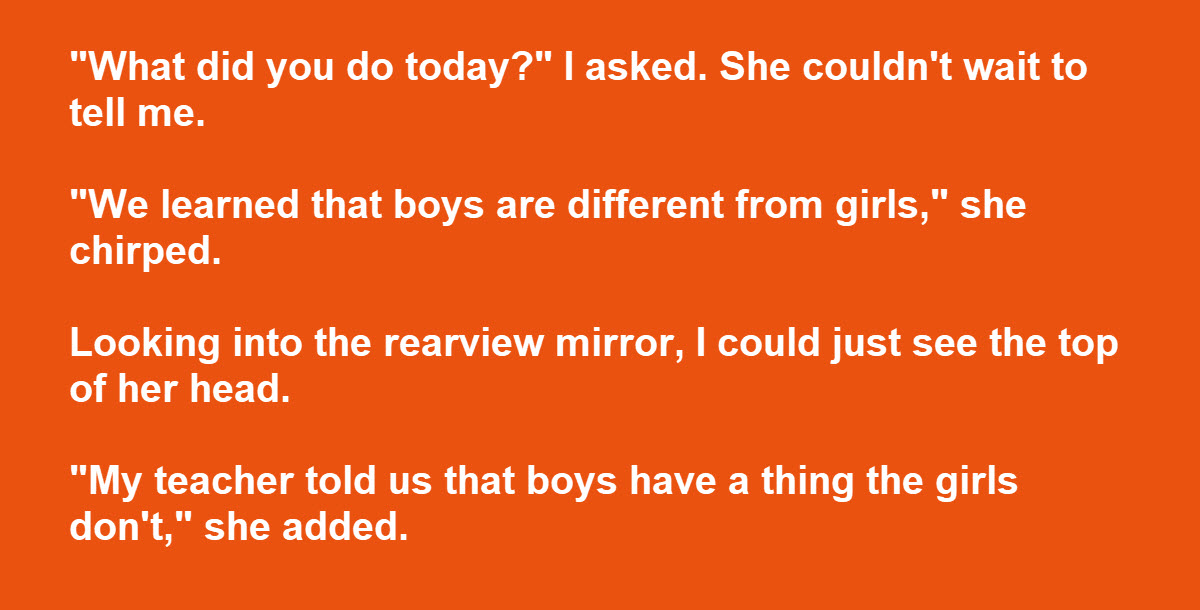 There was a show back in the mid-1900s called “Kids Say the Darndest Things.” The host of the show was a beloved comedian named Art Linkletter. The show’s premise was to bring children onto the show and ask them questions. Their answers were often hilarious and very telling about life in general. Sometimes kids have a way of breaking down the simplest concepts and painting the true picture of how things are. Most things in life can be simplified if they’re seen through the right eyes, and kids seem to sometimes see things more clearly than experienced adults do. In the story below, which is probably fictional, you’ll meet a little girl who managed to change how her dad saw a few different things. Enjoy this hilarious story.

One November afternoon when my daughter was in kindergarten, I picked her up after school. She bobbed out to the car and crawled into the back seat.

“What did you do today?” I asked. She couldn’t wait to tell me.

“We learned that boys are different from girls,” she chirped.

Looking into the rearview mirror, I could just see the top of her head.

“My teacher told us that boys have a thing the girls don’t,” she added.

“Well, yes they do,” I said cautiously.

My palms were beginning to sweat. “Um…well…”

I was still searching for something new to say, to change the subject, when she asked, “Why do the girls like the boys to have those things?”

Well, I didn’t know what to say. I mean, what woman hasn’t asked herself that question at least once?

That last part confused me a bit, but on the whole I thought she had a pretty good grasp on things.

As soon as we got home and I pulled into the garage, she hopped out of the car, fishing something out of her school bag.

I wasn’t sure I did, but I looked at it anyway. I had to sit down.

There, all puffed up, so to speak, looking mighty attractive for the ladies, was a crayon drawing of a great big male Turkey! His snood, the red thing that hangs down over his beak, the thing that female turkeys find so irresistible, was magnificent. His tail feathers were standing tall and proud.

She was a little offended that I laughed so hard at her drawing, and I laughed until I cried. But when I told her I loved it – and I did – she got over her pique.

That was the end of that, for her anyway. But I’m not so lucky.

Every year I remember that conversation. And to be honest, I haven’t looked at a turkey, or a man, quite the same way since.