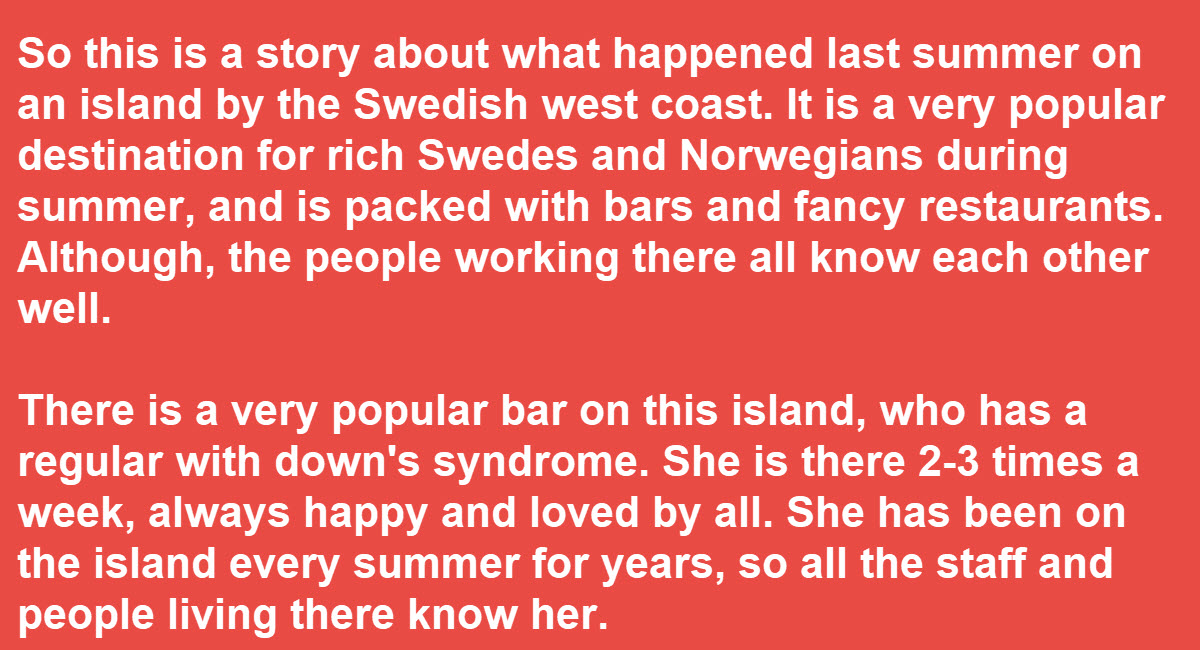 Some folks believe that money corrupts a person. However, that’s not true. Wealth may only magnify a person’s darkness, as with more financial freedom may come fewer social restraints. Some folks forget those humbling lessons life taught them on the way to the top, or in some cases, they never had to learn them. Now, that isn’t to say that poor people can’t be jerks either, but speaking as someone who spent many years in the hospitality industry, there’s a difference between working-class jerks and those who feel they are walking gods. The arrogance and sense of self-importance are as pungent as bad cologne (which they are also known to wear from time to time). In this fictional fable, a two rich tourist decides to harass a hardworking island waitress, so her boss decides to teach them a lesson they won’t soon forget.

So this is a story about what happened last summer on an island by the Swedish west coast. It is a very popular destination for rich Swedes and Norwegians during summer, and is packed with bars and fancy restaurants. Although, the people working there all know each other well.

There is a very popular bar on this island, who has a regular with down’s syndrome. She is there 2-3 times a week, always happy and loved by all. She has been on the island every summer for years, so all the staff and people living there know her.

Last year, during the Monday of the busiest week of the year (packed with rich, loud people with big boats) two Norwegian guys in their 40s started harassing and making fun of the regular with downs. The staff saw what happened, and threw them out.

But the girl was in tears, and everyone was mad. The owner of the place quickly sent one of the staff to take pictures of the two men. He then sent them to every owner of a restaurant, bar, nightclub and shop on the island and explained what had happened.

The following week, the two guys could not buy a beer or food on the entire island, and had to travel by boat for 30 minutes to do so.