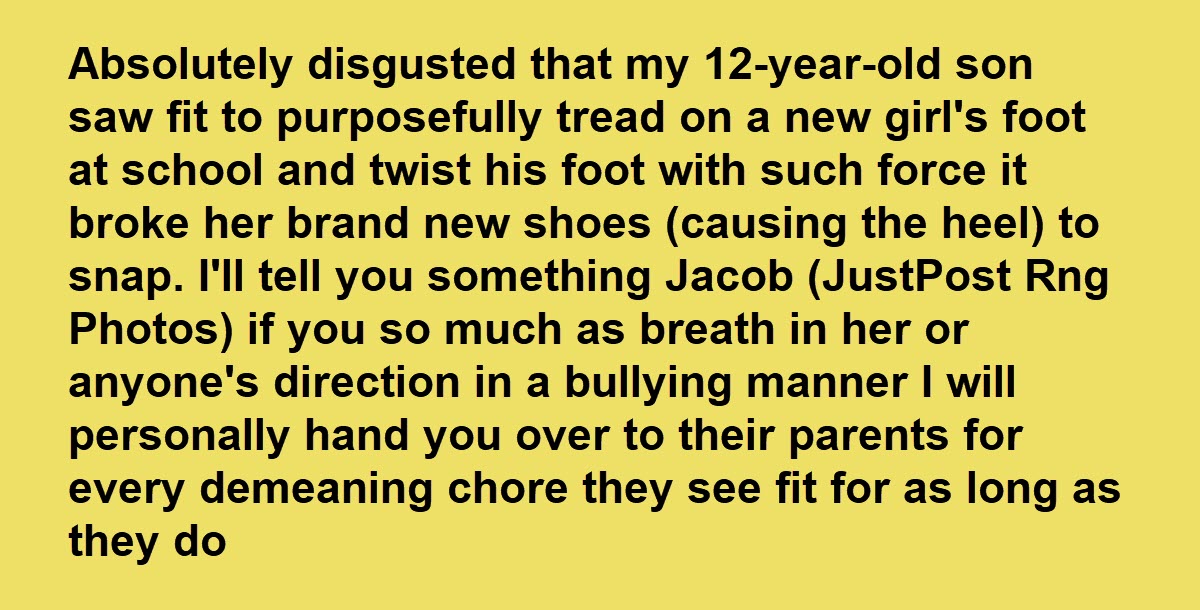 My son was the victim of bullying on more than one occasion when he was a little boy. He was kind of a nerdy kid, I guess, and there were people who enjoyed picking on him. Thankfully, he grew out of it, but I can tell you that there’s nothing more heartbreaking as a parent than to watch your child suffer through being bullied. It just rips at the soul of the parent and the child. Even thinking about it now more than 10 years later, I get angry, and I think when I’m 90, it will still make me angry. However, then something else happened. When he was in elementary school, I found out he bullied a little girl. I was mortified, and looking back now, so is he. I made him apologize to the little girl in front of his class and give her a gift. He was humiliated by this, but now he says it helped him to grow. A woman named Terri Day Evans posted to Facebook about her son being a bully. Read it below.

“Absolutely disgusted that my 12-year-old son saw fit to purposefully tread on a new girl’s foot at school and twist his foot with such force it broke her brand new shoes (causing the heel) to snap. I’ll tell you something Jacob ( JustPost Rng Photos) if you so much as breath in her or anyone’s direction in a bullying manner I will personally hand you over to their parents for every demeaning chore they see fit for as long as they do… kiss goodbye to your birthday money as you will be buying the girl a new pair of shoes and a bunch of flowers! #iwillnothaveabullyinmyhouse”

Update. To answer a few questions, yes my son can see it, he was tagged in it before it went viral (which I didn’t realise was going to happen) so his friends could see that his actions have consequences. he is not big, clever, hard or funny, he’s a 12-year-old boy answerable to his mam.

I don’t much care who doesn’t agree with my parenting style, my son humiliated and embarrassed a girl, regardless of his reasoning (which was he didn’t expect to break the shoe he just thought she may step out of it or stumble) that little girl still cried, for anyone’s knowledge that girl may have left her old school because she was being bullied… then imagine how much worse my son’s ridiculous act would have made her feel. So my so-called embarrassing him online is a to be quite frankly nothing in comparison to the humiliation that little girl had to face walking round with a broken shoe and red eyes from crying when she is new.

Ps… of course I sat and spoke to him about his behaviour, I didn’t just tag him in a post and he read it! I am wholly confident this was a single occurrence which won’t be repeated.”