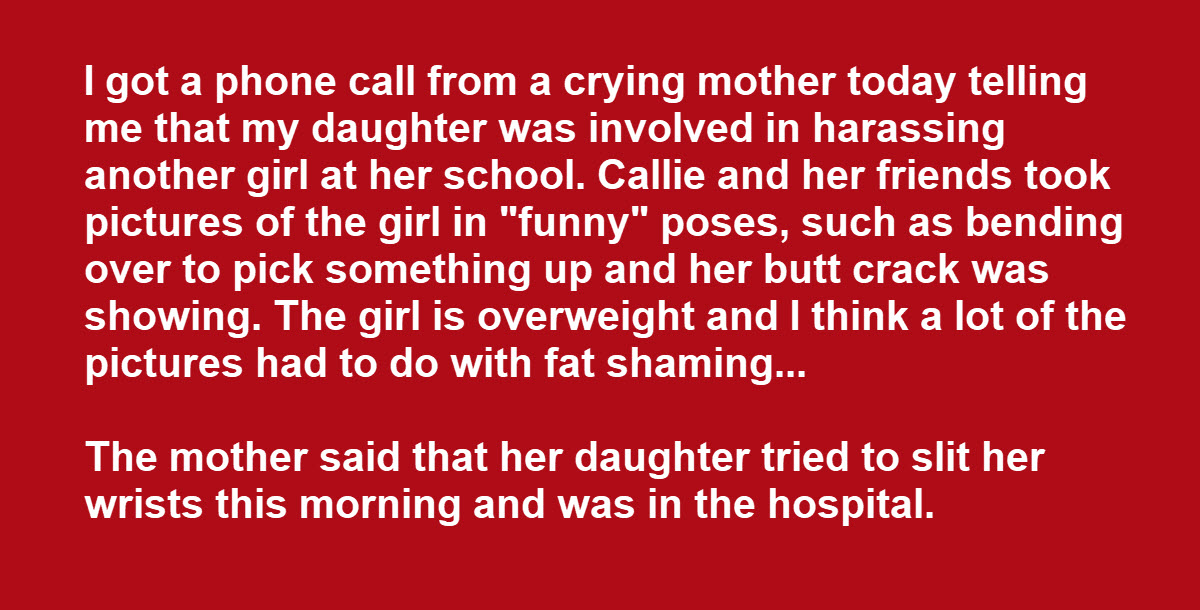 One of the worst days of my life was when I found out my little boy had been bullied by some older kids in two places: at a special school session and on the school bus. I was horrified and heartbroken on both occasions and addressed the parents of the bullies. It’s hard to soothe a child who has been the victim of bullying. He was a proud little boy and his dignity was damaged. How does one restore that? However, knowing that his dignity was important to him came in handy to me when I had another bad day. The day I learned that my sweet little boy had bullied a child in his class.

The little girl was challenged, I think, and she was overweight. I found out my little guy had been making fun of her. So what did I do? I made him buy her a gift and put it in a special bag. Then I instructed him to go before his class and announce that he owed someone an apology. He asked the little girl to come to the front of the room and told her that he thinks she’s a nice person and he and his friends were being jerks for bullying her. Then he gave her the gift. At the time, he was mortified, but he has since said that it made him a better person. What do you think of the dad’s story below? I think his reaction, whether this story is true or not, is an appropriate one.

My daughter Callie is, to me, one of the sweetest people I know. She gets good grades, has lovely friends, and still finds time to be a wonderful loving daughter. I have never had to ground her in high school, and she had never given me a reason to believe she is acting out.

I am a single dad of 3 girls. It is tough, but I thought we were doing okay. Callie is the oldest.

I got a phone call from a crying mother today telling me that my daughter was involved in harassing another girl at her school. Callie and her friends took pictures of the girl in “funny” poses, such as bending over to pick something up and her butt crack was showing. The girl is overweight and I think a lot of the pictures had to do with fat shaming…

The mother said that her daughter tried to slit her wrists this morning and was in the hospital.

Callie is at the beach today and should be home in a few hours. I am so mad, I don’t know what to do. I have always taught her to be kind and respectful to others, and I feel like I don’t even know her. From what I have heard, Callie was the ringleader in all of this…

That was a few days ago.

So Callie was scheduled to get home at 8:3o this evening. I get a call at 8:15 from her. She said she was going to stay at a friend’s house overnight. I said, “no, I need you to come home right now.” She said “I’m already here! Bye!” And hung up. I decided to go get her instead of arguing over the phone.

I went to the friend’s house, it was empty. I started calling the parents of her friends and finally, someone’s brother picked up and said they were at the park. Sure enough, I go to the park and there are about 3o kids there around a fire pit. I see her with a solo cup standing next to a beer keg.

So I don’t usually get angry… but I had had enough. I went straight up to her and told her that I was not going to make a scene, but she needed to get in the car with me. She turned into another person. “I’m almost 18! You can’t do this to me! You are embarrassing me!” I snapped.

I’m not sure what I said, but it was along the lines of: “You should be embarrassed! You put a girl in the hospital because of what you and your friends have been up to and now you have lied to me and you are drinking alcohol underage. Your mother would be so ashamed of you, I don’t even know who you are anymore.”

I caused quite a fuss, so she got in the car and she is home now. I have taken away all electronics (laptop, cell phone, TV privileges). I told her she needed to log into the anonymous Facebook and post a message apologizing and naming herself as the person who posted the pictures. When she logged in, I immediately looked through her posts. It wasn’t just one person she had posted about. This Facebook page was dedicated to making fun of the “nerds and loners” of the school. There must have been 5o pictures.

She posted the apology and then I made it clear that she was not to do anything for the rest of the summer. All plans are canceled until further notice. She can use the landline phone if she needs to, but only when I am there.

Other consequences I am enforcing: Community service – still researching that, and looking for advice about it.

When the girl gets out of the hospital Callie is going to apologize to her and her family.

I have taken the door of her room off its hinges. No privacy for a while.

Everything in the house that she has as a luxury is gone. This includes all the expensive chemicals for skins and hair that I have bought her. I gave her simple shampoo, conditioner, body wash, and lotion. Otherwise, it is all in the garage. She also lost her makeup (don’t know if I will keep this enforced). I took everything out of her bedroom that she uses, and she basically only has books and her keyboard piano. I have told her to catch up on reading and to try practicing the piano that she begged for and then never used.

I told her to take the night and think things over. If she wants to fight me on everything tomorrow morning, then so be it. If she takes her punishment and agrees to these terms, then I will consider how long the duration should be.