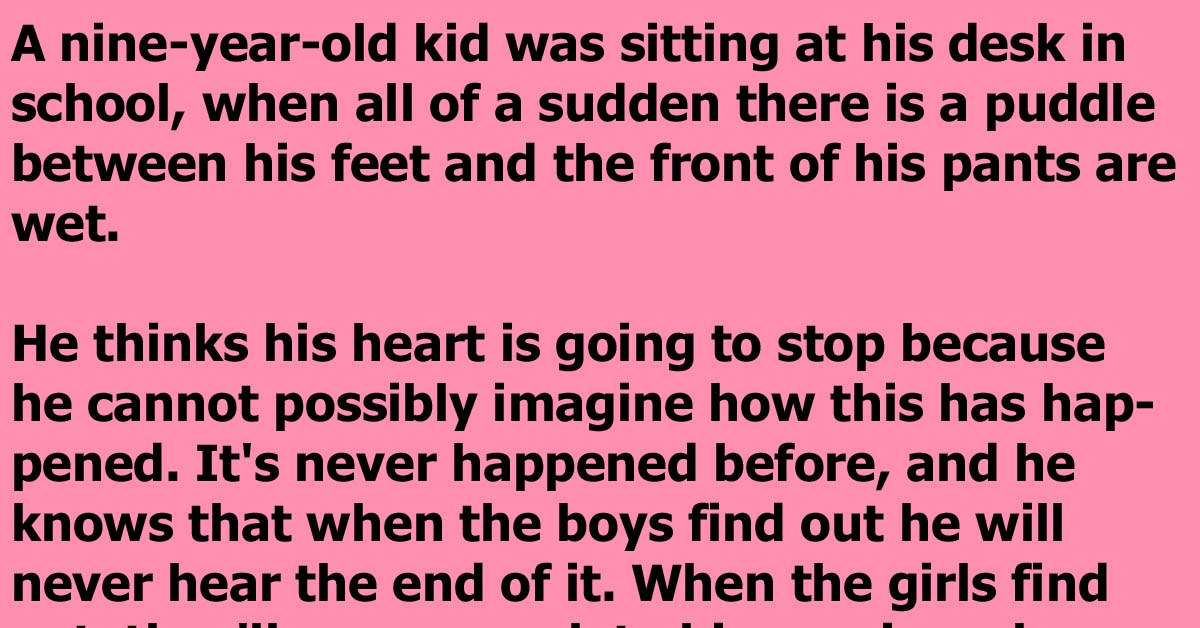 All of us are going to have some type of embarrassing situation that we must face in life. At times, it happens out of the blue and we don’t have any control over it. Perhaps you can think back to a time when you were having such a difficulty and you wish that you could simply crawl under a table and and escape it all. I’m sure that’s how the young boy in the following story was feeling when he wet his pants at school. It’s a situation that many of us have found ourselves in when we were youngsters but for this young boy, help was coming from a most unexpected source. We can’t verify the story but we can tell you that it is beautiful.

A nine-year-old kid was sitting at his desk in school, when all of a sudden there is a puddle between his feet and the front of his pants are wet.

He thinks his heart is going to stop because he cannot possibly imagine how this has happened. It’s never happened before, and he knows that when the boys find out he will never hear the end of it. When the girls find out, they’ll never speak to him again as long as he lives.

The boy believes his heart is going to stop, he puts his head down and prays, “This is an emergency! I need help now! Five minutes from now I’m dead meat.”

He looks up and here comes the teacher with a look in her eyes that says he has been discovered.

As the teacher is walking toward him, a classmate named Susie is carrying a goldfish bowl that is filled with water. Susie trips in front of the teacher and inexplicably dumps the bowl of water in the boy’s lap.
The boy pretends to be angry, but all the while is saying to himself, “Thank you! Thank you!”

Now all of a sudden, instead of being the object of ridicule, the boy is the object of sympathy. The teacher rushes him downstairs and gives him gym shorts to put on while his pants dry out.

All the other children are on their hands and knees cleaning up around his desk.

The sympathy is wonderful. But as life would have it, the ridicule that should have been his has been transferred to someone else – Susie. She tries to help, but they tell her to get out. “You’ve done enough, you klutz!”

Finally, at the end of the day, as they are waiting for the bus, the boy walks over to Susie and whispers, “You did that on purpose, didn’t you?”

Susie whispers back, “I wet my pants once too.”